Know About the Board of Secondary Education – Sikkim 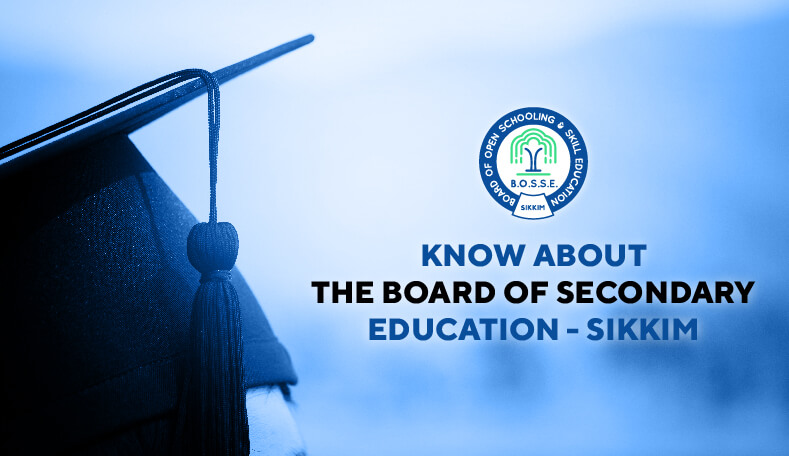 The Government of Sikkim established the Board of Open Schooling and Skill Education, or BOSSE, as an open schooling board under Act No. 14 of 2020. AIU has given BOSSE’s credentials equivalence status, meaning that they can be utilized in future studies. This well-known Board of Secondary Education is committed to offering high-quality education to its students to foster intellectual, social, and cultural vitality. This board constantly strives for the advancement and improvement of the school education system, as well as the development of appropriate curricula for vocational and continuing education to prepare students for the workforce. BOSSE, a reputed Board of Secondary Education, is envisioned as a full-fledged educational release institution. It gives students the freedom to obtain an education without having to attend daily classes. This board has developed competence in delivering instructional possessions and has created an education program as a planned extended learning activity. BOSSE aspires to develop an institution of distinction where young minds are enthralled by a desire to study, a spirit of exploration, and a methodical temperament. Its goal is to treat all students as agents of change who are capable of not only surviving in advancing humanity but leading it without abandoning their values and principles.

Since independence, the Indian government has made significant efforts to guarantee that every student in the country obtains a quality education at a reasonable fee. After seven decades of independence, India has built a massive chain of schools, with 14,94,052 schools, comprising government, government-aided, and private schools, according to the latest Central Government data. According to Statista.com (a German company specializing in market and consumer data), in 2018, 131 million kids enrolled in government schools in India, whereas 119 million students enrolled in private schools. With over 250 million students, India’s educational system is one of the world’s largest. According to the UNESCO Institute for Statistics and Global Education Monitoring, 32 million poor children have never attended school and 47 million have dropped out by the tenth grade. According to a poll conducted by the Institute for Policy Research Studies (PRS) in New Delhi, 77 percent of students in class 10 are enrolled, whereas just 52 percent are enrolled in class 11. In this area, school dropout is a big problem. According to a government report, the country’s secondary school dropout rate is over 17 percent, with 1.8 percent and 1.5 percent dropout rates in upper-primary (VI to VIII) and basic schools, respectively.

BOSSE, as an open board enables all disadvantaged students to achieve their higher education goals. As an Open School Board Exam, BOSSE makes it simple to complete any course you wish to study. The board offers an On-Demand Examination (ODE) facility, which allows students to finish their education in one year. This well-known ODE concept allows students to appear for exams when they are well-prepared. Aside from students in classes 10 and 12, applicants who meet the board’s qualifications may apply for courses to continue their education in a private setting.

BOSSE, a Board of Secondary Education promotes or uplifts the downtrodden and disadvantaged groups, deprived sections of society, and women, regardless of caste, creed, color, religion, or language, in all aspects of life, including social, cultural, health, educational, and economic, and helps them become self-dependent by alleviating poverty and eradicating illiteracy. BOSSE’s primary aim is to improve the target group’s lifestyle through economic advancement and the development of healthy social life following a newly modernized society, as well as to instill in them the belief that everyone is equal in all aspects of life.